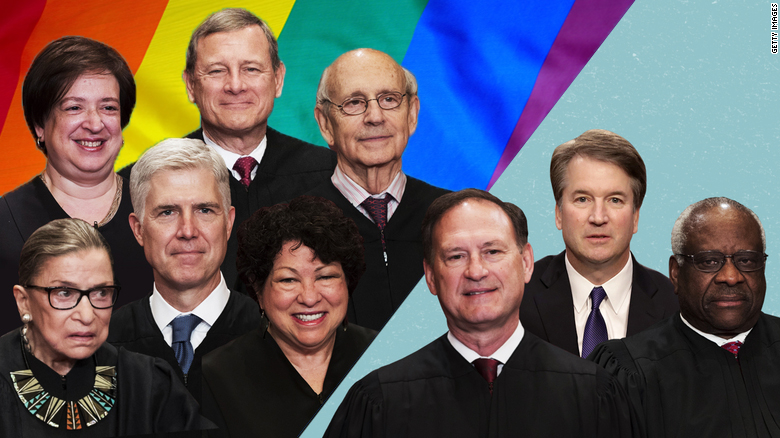 If you have not been paying attention, this may come to you as shocking.  We were saddened to see Justice Neil Gorsuch pridefully embrace LGBTQ+ orientations as equal to race and sex/gender. He was supposedly a constitutionalist and a conservative justice.  Unfortunately, ‘Team Trump’ really messed up big time as they did not recognize that they picked a man who goes to a very liberal pro-gay church. Certainly, in embracing such an unbiblical “Christianity” his so-called morality would be more in alignment with Democrats, which of course is no morality at all when it comes to human sexuality. This may seem like a harsh statement; however, the facts of this ruling speak for themselves. This ruling will be haunting for many years to come as an all-out-assault on God’s divine intent for human sexuality, schools, children, and the church.  These six “Supremes” are in-fact warring against God, women, minorities, and children in riding along with Democrat party platform agendas. This ruling is tragic for women, minorities, and children, as it is only a matter of time before women and minorities are completely marginalized into nothing meaningful. Women sports are already being decimated by men who are ‘trannying’ – meaning transitioning into so-called women. This is impossible, as men cannot become women, neither can a woman become a man.  But, try telling these six “Supremes” that these male to female (M2F) trannies are not equal women. They just voted it so! Now employers must embrace this mental illness as equal to race and sex(gender) as well.

These “Supremes’ have violated God’s righteous laws by ruling to amend the 1964 Civil Rights to force all employers to embrace all things LGBTQ+ behavior to be equal. The Supreme Gorsuch pats himself on the back with communicating a mere subsequent religious exemption, which actually means nothing for the LGBTQ+ cult mentality.  We all know the politically motivated LGBTQ+ bullies will never stop demanding for everyone to embrace LGBTQ+ behavior or else face brutal lawsuits and attacks of every kind. Please pay attention to the “+” plus sign as these behaviors/orientations according to the American Psychological Association also embrace “minor-attracted person” and polyamorous/polygamists as normative orientations to also be included. Yes, the “+” plus sign really does mean a very dark spiraling downward into the grossest of perversions and is part of the Democrat platform.

Please pay attention friends, as the next phase of the political LGBTQ+ agenda is to attack ministries like First Stone with strong manipulative propaganda documentaries to shape the public opinion as you can read in the main article footnotes on page 5.  The Human Rights Campaign, The Southern Poverty Law Center, The Trevor Project, and many other gangs of LGBTQ+ cult leaders are already attacking therapy, counseling, schools and churches with their propaganda. They are coming with anti-therapy laws, pro-LGBTQ+ education from K-12, demands that all colleges and universities embrace their lifestyles, and now all employers; next is for all private education offerings and churches to submit.

This mentality of back-stabbing betrayal and frontal assault comes directly from former colleagues who are apostates now having gone back into homosexuality. Here’s one mission statement: “We are dedicated to full inclusion for LGBTQ+ people through education and advocacy by confronting religion-based stigma, conversion therapy, ex-gay ministry, and all other attempts to change or repress LGBTQ+ people’s innate sexuality and identity.”

The LGBTQ+ policymakers are not hiding anymore! These “Supremes” have only empowered the LGBTQ+ bullies to come full-force after your children, schools, churches, and every single home to force acceptance and compliance to their unnatural behaviors. Well, we have the so-called conservative sell-outs, The Supreme Neil Gorsuch and The Supreme John Roberts who believe themselves to be Black-robed gods for this tragic ruling.