Pay close attention to this well-thought-out very creative “educational-tool” created by the NEA and your tax dollars that is being promoted by the Barack Obama Administration.

This video begins and ends with political iconic cartoonistic graphics that are designed to appeal to children.  The beginning message is emotional.  A sympathetic message of loneliness in being the President, and then immediately the message calls for responsibility and loyalty.  The next 98% of the video is dedicated to hearing the same phrase over and over, “I pledge.”  I counted 33 times “I pledge.” This is no accident.

I don’t have a degree in psychology; however, I have studied enough psychology with classes in college and else where to know this is a directed message. Whoever created this video has methodically thought-through presenting a psychological message appealing to the hearts and minds of young people to “pledge” allegiance.  What does an elementary school mind remember?  The psychology behind this video is a consistent repetitive message of: “I pledge!” allegiance, 33 times! The video’s iconic cartoonish beginning and end is specifically designed to appeal to the elementary child’s mind. This doesn’t take a degree in psychology to discern, this was intentional. 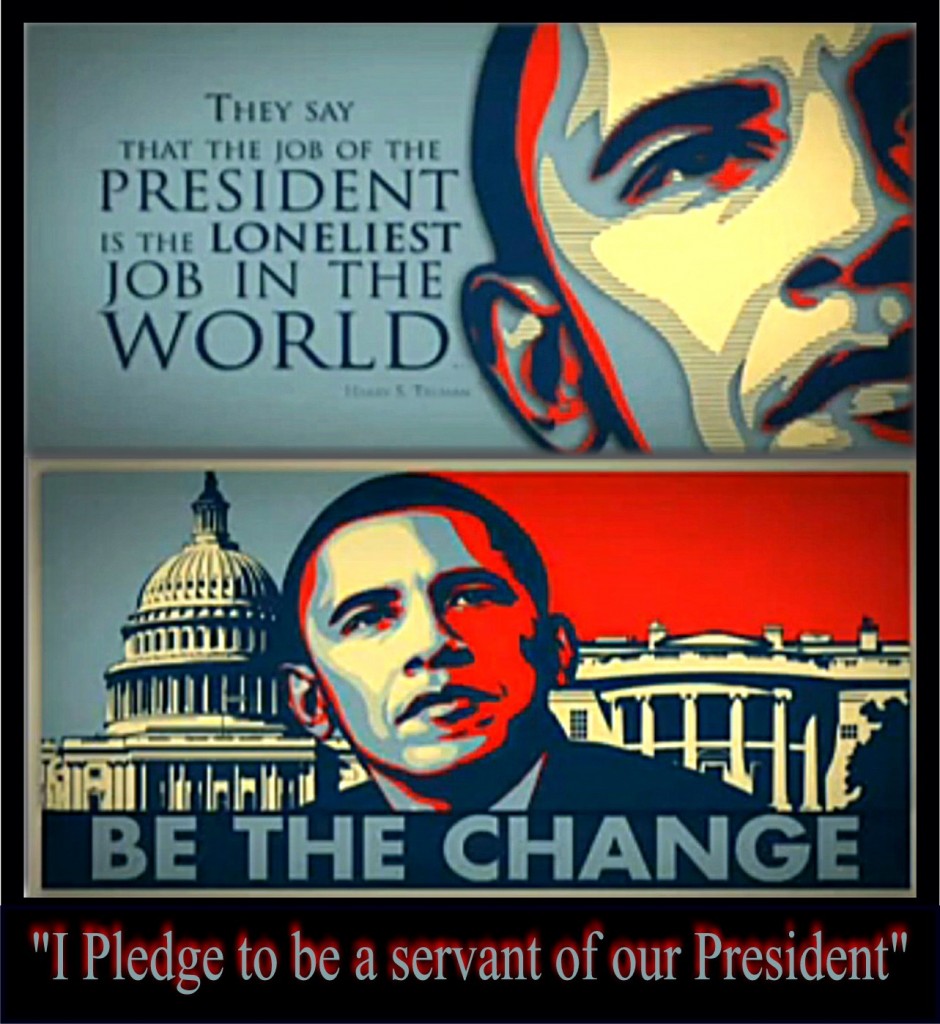 The video then ends with a dramatic closure of all the Hollywood elitists coming together to form the face of Barak Obama.  This message is clearly communicating an allegiance to the man, President Barack Obama, rather than to the United States of America or to defend the Constitution of the United States.  Pledging allegiance to the United States or to the Constitution will not be the message a child comes away from in viewing this video. I also find it interesting that the National Educational Association, the Department of Education and the White House believes that Hollywood elitists who live sexually immoral lifestyles should be the role models for our children.  Well, we were instructed to find the humor in everything. God help us!

If this had been a Presidential address to children to honor their parents, teachers and work hard and to defend the Constitution of the United States, I would give praise to this President, however; unfortunately this is another narcissistic endeavor of this administration to gather the masses to himself.  It is appalling.  I find this video to be a propaganda tool for environmentalists who pledge allegiance to the President rather than to the country. I find this dangerous, and this is the message the White House approved – to pledge allegiance to Barack Obama.

You decide and make your voice know to the superintendents, principals and teachers of your local school districts.  I already have called. What will you do?  We must get involved and make a difference.