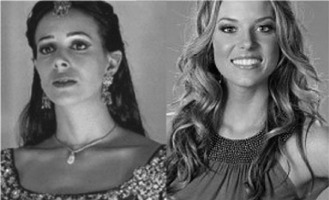 Esther is the 17th book in the Bible. Carrie Prejean entered the pageant world at age 17. Esther was a winner of beauty contest to be a queen, and Carrie Prejean was in a beauty contest. I am not trying to communicate that Carrie's stand for righteousness is equal to an Esther.  I am amused by God using the simple things in this life to confound the wise and even religious. Isn't interesting how God used the incredible life of Esther to save the Jews from destruction.  Esther actually won an ordered line-up-beauty-contest to see who would be the king's wife.  Esther was born "for such a time as this" to bring salvation. (Es. 4:14). Could it be that Carrie Prejean lost her Miss USA crown to gain another crown?  Perhaps a crown of righteousness?  Perhaps to lead the way of courage and wake up many other Christians to stand up for the truth! There are many pastors and Christian leaders who could learn courage from this woman.  I am not writing this because I think Ms. Prejean is perfect, we all have a past, but it is about the present and being courageous.  Mean people will dig up her past to use it against her. Yet, with political-correctness opposition, gay marriage promoters, and hate crimes legislation to potentially arm gay activists to stop Christian speech, perhaps Carrie Prejean has been used of God to defend marriage and the Gospel of Jesus Christ, for a call to others to follow. Perhaps it takes a little 21-year-old young-woman to speak the truth. Truly God has a bigger crown than Miss USA for Carrie Prejean.  We must seek God's approval and not mans' approval and Carrie Prejean was good example of this truth. I am very proud of this 21 year-old culture-warrior.

Carrie Prejean has said nothing wrong; she merely took a stand for her belief about marriage and it cost her.  God gave Carrie His word as she traveled to New York the next day after the pageant for her first interview. Carrie was asking God, "why?" And her Bible opened to "Indeed, all who desire to live a godly life in Christ Jesus will be persecuted..." 2 Tim. 3:12 This is true for all those who desire to follow Christ.  Carrie had no idea what was going to happen.  Listen to this interview "No Compromise: Standing Firm On Your Faith" and be encouraged. 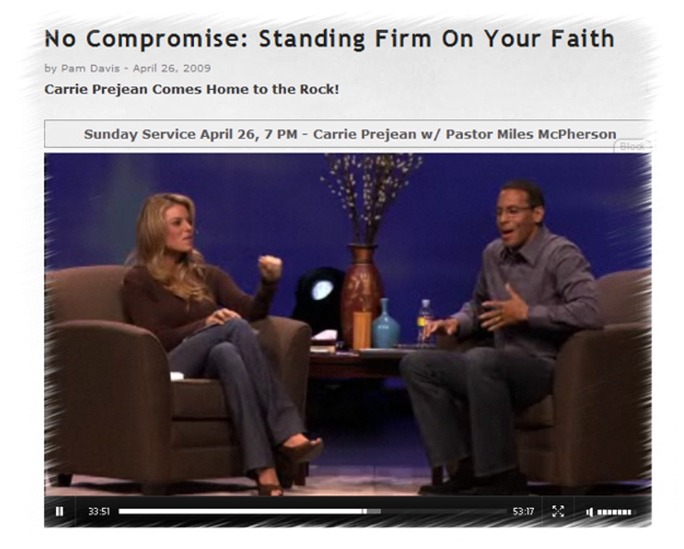 Carrie's Pastor - Miles McPherson interviews Carrie about the behind-the-scenes story.  This is an excellent interview and a wonderful word of encouragement, especially for those of us who are under attack by cruel and hateful people.  We must STAND strong for the truth!

Here are Pastor McPherson's message points "STAND" from the interview:

1) S - Stare Down Courage ~ we must have "stare down courage!" We must put our lives on the line for The Truth! We cannot be intimidated by angry gays or those who are politically correct.

2) T - Trust in The Truth and never a lie!  We must base our lives on the truth of God's word.  If we always tell the truth we don't ever have to wonder what should be said, we will be speaking God's truth.

3) A - Accept God's Sovereign Provision - God will provide our needs even when it seems like everything comes crashing down for those who live according to HIS principles.  God will give you courage, wisdom, help, strength and physical provisions. (This point really blessed me today!)

4) N - Never Fear Man! "The beginning of wisdom is the fear of the Lord."  Our God is holy and we must love and obey Him rather than please man.  The fear of man is a snare to our soul.  When we walk in the holy fear of God our motives will be made right by His Spirit, but when we fear man it will lead us into deception.

5) D - Die to Yourself - We must be true to ourselves; by having a life devoted to Jesus Christ as Lord.

Carrie Prejean ended this interview by thanking the gay community.  A very classy and kind woman, not that I agree with her assessment that most of the gay community is kind towards her beliefs.  As a former homosexual, I am very doubtful about the majority of the gay community's sentiments with Carrie's belief.  Again this just shows Carrie's willingness to be kind in the face of such hate! "We overcome evil by doing good." A Biblical truth foreign to the homosexual community. I actually do agree with Carrie that there are civil minded homosexuals that actually realize that Carrie isn't a bigot to believe in God and the Bible, unfortunately they are few.

Pastor Miles McPherson was interview on The O'Reilly Factor this evening, May 5, 2009.  This was his answer to Bill O'Reilly concerning the pastor's belief about gay marriage:

“I find it very offense that someone would equate their behavior to my ethnicity, I know a lot of people who USED TO be gay.  I don’t know any body who USED TO be Black.  I don’t see the similarity between those two things. I am offended by it. We are talking about behavior and someone’s ethnicity and there is no comparison between those two things.  What is the evidence that God makes people that way (gay)? There is no evidence (science) of that.  And does the Bible affirm that God made people homosexual? (No) Which He doesn’t.  I would say where’s your evidence? If people feel one way, that’s one thing, but to say that God did (make people gay) that's a whole other thing, I think we have to go to the Bible and look at what HE says."

Pastor Miles McPherson made it very clear that he does not believe that people are created by God to be homosexual, and communicated in the interview that we must believe the Bible!  Thank God for another pastor willing to stand for the truth, and who continues to stand for Prop. 8.