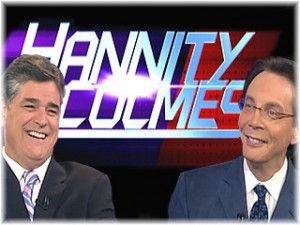 I have been watching the last segment of Hannity & Colmes (FoxNews.com) this evening. I was very impressed with Sean Hannity and Alan Colmes in how they ended their show tonight.  They were both very professional, spent time actually blessing one another, recalling the last 12 years and airing highlights, they were very complementary of one another, even admiring each others differences and ended the show with a fun gift exchange. They seem to actually enjoy one another this evening and complemented their friendship.  Sean was very classy and topped the giving time as he gave Alan a beautiful Rolex watch as this final show ended. What a terrific guy!  Wouldn't it be great if people who disagreed could be so civil and actually be maturely tolerant.  Wouldn't it be especially great if it could be true from those who scream for tolerance the loudest?

Sean Hannity is my favorite news commentator and talk show host on television and radio.  Truthfully, I have rarely enjoyed listening to Colmes.  I have actually wished that Sean would have his own show.  When FoxNews launched "Hannity's America"  I was thrilled!  I am very excited to see "Hannity" air this week. I agree with him almost all the time, matter of fact I think I can count on one hand when I have actually disagreed with Mr. Hannity.  It is really rare when I do not agree with Sean. I could never say that about O'Reilly or Limbaugh, though I also enjoy listening to their programs as well.  I also really enjoy the new program Huckabee.  Mike Huckabee's show is also a must watch. A new program slated for this coming week on FoxNew is Glen Beck's.  I look forward to watching Glen. FoxNews just keeps getting better and better!

Sean Hannity (www.hannity.com) and I have a few things in common.  We both have mother's from Ireland and they are first generation immigrants.  Sean is 100% Irish, with both parents and grandparents immigrants, yet I am only a little over half.  However, we both love our Irish heritage.  We were both raised as Catholics and we both have attended Catholic parochial schools.  Sean excelled in that environment and went on to attend Catholic seminary. We both have been attacked about our "lack" of education because neither of us have a formal degree from a university.  The superiority of those who attack a person on such bases reveal a true arrogance, ignorance and their own insecurity with a degree.  The training we have received has been mocked.  We are also born in the same year as the new President-Elect Obama, 1961.  What a great year!  John F. Kennedy became the President the day before I was born!  Well, the thee of us, Obama, Hannity and I will be 48 years old in this Y2K9.

I am really hoping that Y2K9 doesn't go to the K9's with the Democrats in control of everything.  It seems it could all go to the dogs in Y2K9.  However, I have great hope that Sean Hannity will be watching things very closely with  fair and balanced coverage in this new age of American politics.  I applaud FoxNews for giving Mr. Sean Hannity a show of his own without the liberal left chiding in at every turn  in the presence of Alan Colmes.  One merely needs to flip the channel to all the other networks to get the leftist point of view. Sean's not my hero, but he is a great American;  thank God for FoxNews and Sean Hannity!