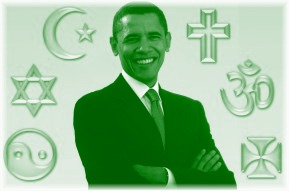 President Obama recently went on a world apology tour (as David Limbaugh reported) accomplishing very little in strengthening the USA or world economy as was the intended promise from his multi-million dollar trip.  Yet, President Obama told the world, while in Turkey, that the "United States of America is not a Christian nation or a Jewish nation" and thank God he didn't go on to say that the United States was a Muslim nation.  However, I must admit I am more suspicious than ever as President Obama went out of his way to break protocol and bow to the King of Saudi Arabia. The Muslim world loved President Obama's bow of submission. He told the world that he considers the United States merely "a nation of citizens who are bound by ideals and a set of values."  I would like to ask President Obama where does he think the USA receives its' bounded ideals and its' set of values?

It doesn't take much research into American history to understand that our ideals and values are founded in Judeo-Christian beliefs derived from the Holy Scriptures found in the Bible.  One merely need read over the Bill of Rights and Amendments to understand these documents are derived from biblical principles.  What about the foundations of law in the United States? One merely need to study our history to find out that our laws are taken from the Ten Commandments and from the Torah. —William Blackstone is the founder of most of our common laws and he complied most of our laws from the Scriptures of the "Christian" Holy Bible. Historically the laws and founding documents of the United States of America are founded on Biblical principles and literal quotes from the Bible.  Can someone please help our President? 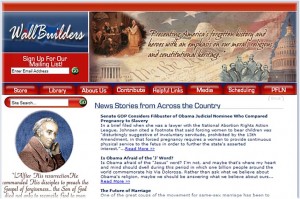 I wished David Barton with Wall Builders could take him on a tour of our Capitol and point out these historical facts with his wonderful insights as David has with thousands of others. (There are many more documents of historical facts to prove all what I am writing to be true).

The majority of American citizens consider themselves as Christian. I completely disagree with President Obama on most of his leadership.  No surprise here, as anyone who knows me, knows I don't agree with much of this President's direction for our country.  He has made it very difficult for me to respect the office, but respect I must as I am commanded by the Scriptures.  President Obama calls himself a Christian at least most of the time, and all the more reason I must pray for him.  However, I find myself actually partially agree with the President, as I do not believe the USA is a Christian nation in practice, I actually see our nation in a great need of revival.  I fear for our country. I would imagine that less than 25% of those polled above are actually devout.  However, one merely need read this wonderful book: "America's God and Country - Encyclopedia of Quotations by William Fedrer and read David Barton's Wall Builder site and you will know that we are in fact a nation built upon the Christian faith.  Would someone from the Obama Administration PLEASE help our President and instruct him to read this book of quotations? 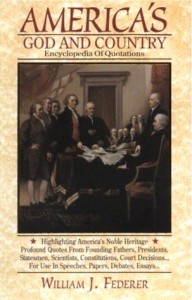 IS the United States of America a Christian nation?  No doubt what-so-ever that the United States of America is originally a nation designed to have Christian values, beliefs and a variety of Christian denominations for the free exercise of Christian practice — and therefore was intended to be a Christian nation. To deny this, is to deny well documented history, and ultimately make yourself out to be foolish.  Unfortunately, I fear with the great Billy Graham that there are many within the Church at large that actually need to be saved. Many will come to Jesus and say that He is their Lord, but He will deny them: Matthew 7:21-29. Therefore we need to be a devoted Christian people in love with the Savior, Jesus Christ as our Lord, in the Church first, and then perhaps we can once again be a Christian nation.

I close with this final quote: "Our laws and our institutions must necessarily be based upon and embody the teachings of the Redeemer of mankind (Jesus Christ). It is impossible that it should be otherwise; and in this sense and to this extent our civilization and our institutions are emphatically Christian." — United States Supreme Court 1892, in the case: Church of the Holy Trinity v. United States