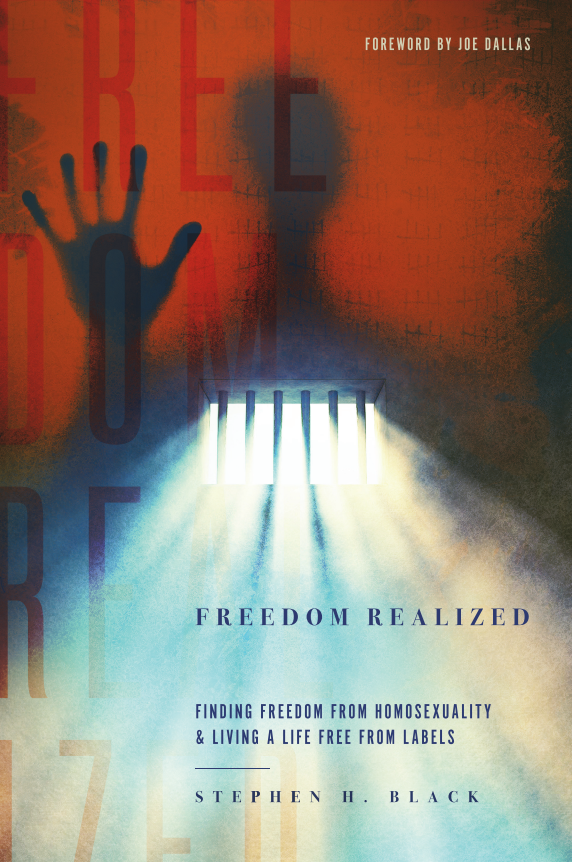 A passionate and convicting book that gives clear evidence that people, in fact, find lasting freedom from homosexuality and freedom from a life defined by “gay” identity fallacies. This book is needed by church members and leadership as arsenal in their battle for truth in this day of “hip-hop gospel relativism” of people dumbing down the power of the Gospel of Jesus and His available transformation.

Stephen Black was the Chairman of the Ministry Council of  Exodus International in 2012 which subsequently failed and closed up because it denied its own mission and purpose to bring full healing and restoration to those seeking a sexual identity defined by Christ alone. It was during this time Alan Chambers, President of Exodus International began abandoning the Exodus International mission. Chambers started communicating an ambiguous and deceptive message that no one’s same-sex attractions change, and thus leaving people condemned to live a life defined by a gay identity. This was a dark time as Chambers completely contradicted the message of true hope in the Gospel of Jesus Christ. Chambers’ proclamations, repeated daily by gay activists, compelled Black to see that the true banner of hope was being raised elsewhere by then, the 36-year-old ministry of First Stone Ministries and by other ministries that later joined the Restored Hope Network.

Polled over a period of 13 months, respondents to a First Stone Ministries’ survey from a 25-year period of ministry (1990-2015), provided evidence that First Stone has indeed produced the healing available through the Gospel of  Jesus Christ. The results are amazing!  The survey revealed the exact opposite to Chambers’ gay-affirming proclamations. Truth is, many people have found lasting freedom!

Freedom Realized describes a behind-the-scenes unfolding of Black’s and other leaders’ attempts to restore righteousness to Exodus International. Unfortunately, it was not to be. Instead, in September of 2012, God raised up a new voice to offer hope to those seeking lasting change by forming and empowering the Restored Hope Network. Freedom Realized, in part, is a tribute to many of the courageous men and women of God who worked to form Restored Hope Network, such as Frank Worthen who was a spiritual father in this move of God and who has recently gone to be with Him.

What Makes Freedom Realized Different?
There are some unique and significant differences which distinguish Freedom Realized from other books dealing with overcoming homosexuality. First, this kind of survey has never been conducted by an “ex-gay” ministry. Second, Freedom Realized takes a hard look at problems in ‘ex-gay’ ministry—what works and what doesn’t. It shines light on why some people find lasting freedom and others eventually fall away and go back into darkness.  Third, this book exposes some of the deceptive messaging from the mixture of antinomianism and psychology that lowers the bar of holiness and hinders the freedom that Christ’s Gospel imparts. This book brings the light of Christ’s holiness and love to the “gay Christian” distortion. Freedom Realized imparts a powerful hope by showing how to access the power to find lasting freedom and practical helps for ministry. Finally, the book bolsters confidence to attain freedom through wonderful insights from seasoned leaders with over 20 years of experience in helping people overcome same-sex attractions and in living a life of holiness in surrender to Jesus Christ. These leaders convey sound truths in their messages on how FREEDOM is REALIZED!  This book is offered to encourage your own soul, your friends, your family members and especially church leadership to hold the front line of holiness concerning transformational grace!

You can order now from First Stone Ministries' Marketplace, or from the publisher, Redemption Press.

First Presentation of the Freedom Realized Project information!  Presented at the Restored Hope Network HOPE 2016 Conference in Orland Park, IL.  This presentation provides a glimpse into some of the initial statistics (1989-1999)  from the First Stone Ministries Effectiveness Survey to be shared in the Freedom Realized book and report.

Following are Messages on "Freedom Realized" by Stephen Black

Pure Passion Testimony: Freedom from Homosexuality to Holiness to Helping Others!