This important new book can be roughly divided into three sections: the amazing story of Stephen Black; how churches and Christians should respond to the issue of homosexuality; and lastly, the testimonies of 16 other ex-homosexuals.

Anyone aware of how so many people find themselves trapped in the homosexual lifestyle will be familiar with what we learn about from Black. He, like so many others, was largely drawn into this world because of older men and their unwanted interactions.

Black was molested by a male babysitter when he was just six years old. He was soon exposed to pornography, and at age nine his next-door neighbor started to molest him. Others abused him as well, and soon enough he began to believe the lie that he was born that way.

Instead it is a learned, sin behavior, and “in most cases, the behavior is inflicted by abusive outsiders then chosen as the lie takes root.” By age twelve he was taking drugs, and soon he was suicidal. He became fully involved in the homosexual community and lifestyle by 1975.

He was never very happy in all this, and when his younger brother died of alcohol poisoning, he began to cry out to God. In February of 1983 at the age of 22, Black had a radical conversion to Christ. Says Black, “Total deliverance from homosexuality comes only through a new lifestyle of absolute surrender and a complete dependence upon Jesus Christ as Lord.”

Today he can say that “homosexuality and same-sex attraction no longer nag at me”. That does not mean that things have been easy ever since, with no tests nor trials: “To realize freedom, one must embrace a new lifestyle of suffering, dying to self, and yielding our life to Christ and others in the community of true believers.”

In the second part of this book Black notes how much of an attack on the gospel-centred message of freedom in Christ there is found in so many churches of late. Too many believers have bought the lie that change is not really possible, and many even claim that change is not even necessary!

To correct these falsehoods and distorted notions, he looks at the common features of why people move into the homosexual lifestyle. These include things like traumatic childhood experiences and faulty perceptions of one’s self; abuse, molestation, and pornography; and breakdown of the family and father-absence.

Says Black, “From my experience, these overall common causes were true for the majority of the men I have served in pastoral care. Most of the people we serve had at least some kind of sexual distortions in their childhood histories before puberty.”

He looks at why some who seek to leave unwanted same-sex attractions do not always go on to achieve substantial victory. An unwillingness to live a life of repentance, dying to fleshly desires, and seeking to find a whole new identity in Christ is part of this.

Other reasons why some fall back into sin include: refusing to break off close associations with those who practice homosexuality; a lack of desire to be fully conformed to the image of Christ; and sadly, far too many churches and church leaders telling these folks that change is not needed, and God loves them just as they are.

This compromise and capitulation in so many churches is one of the main obstacles to helping those who want out to find full freedom and deliverance in Christ. They are being sold a bill of goods by these worldly and unbiblical churches that refuse to present to them the truth that they so desperately need. 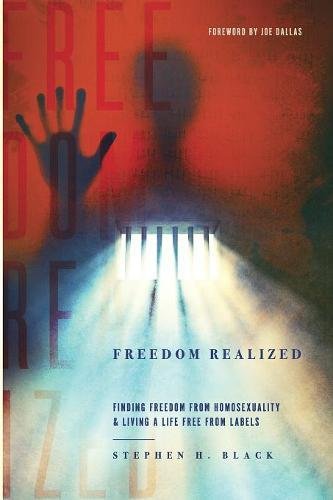 He offers three key things that are needed to achieve real, lasting, and consistent freedom in Christ. First, they need accountability. No one can fight these battles alone, and they need others to be close and accountable to. Second, they need boundaries in place to keep them from temptation. Third, they must engage in spiritual warfare, as this is at bottom a spiritual battle.

And he reminds us that this is not a quick and easy fix, but a continual struggle: “Our Western mindset of drive-by-Christianity gives us the expectation that change will happen quickly. However, for many people, inner healing and transformation of the soul, the mind, the memories, the will, and the emotions can take years.”

So instant perfection is not what is being argued for here. For most people as they seek consistent transformation, there will be some relapses, and some back-and-forth in the journey. All addictions, and especially all sexual addictions, are difficult things to break, and it can be a lifelong process.

He also looks at the false gospel of “gay Christianity,” reminding us that Jesus died to deliver us from our sins, not to leave us trapped in them. The deception that says people are born homosexual and God is happy with them just as they are is a lie from the pits of hell, and is the heart of what is evil.

We all need uncomfortable, soul-saving truth, not sugary-sweet falsehoods and deceit from the enemy. We must reject the lies of having, or being, a homosexual identity or orientation, and embrace our identity in Christ. Churches running with things like “Mixed-orientation marriages” are simply further strengthening the demonic strongholds in a person’s soul.

That is not the way for Christian churches to proceed here. Instead, we must speak the truth in love, and let people struggling in this know that real change IS possible. We serve a God who specializes in changing lives. Says Black, “The grace of God is transformational.”

The final portion of this vital volume contains the incredible stories of 16 men and women who have been radically and decisively transformed by the power of God in Christ. Many familiar names are found here such as Anne Paulk, Frank Worthen, Joe Dallas, Shirley Baskett, David Kyle Foster and Andrew Comiskey.

Their stories, along with that of Black’s, make it overwhelmingly clear that people CAN be set free from the dangerous and dead-end homosexual lifestyle. Yes, real change is possible. It may not be easy, and it may not be instantaneous, but it most certainly is possible.

Well done Stephen for this crucial book at such a crucial time as this. We salute you for your bravery, your boldness, and your rock-solid commitment to Christ and his Word, and for helping others to be set free.