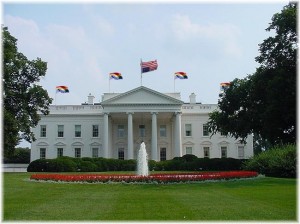 This stated question is one to really ponder, "What will it be like?" I am very concerned what this could mean for our society, for Bible believing Christians and for me as a minister. I am writing the following because I sincerely care about my country, my family and the Church of Jesus Christ. I am not writing in the spirit of condemnation of homosexuality, but rather merely reporting news items and what is going on politically in the political gay agenda, with the National Democrat Party in full agreement. I am sharing many links to where information can be found. I am not endorsing any web site, matter of fact there are some hyper links below that have pornographic documentation. (Please do not view the sites unless you view the blurred images.) I am in no way endorsing pornography. However, I think it is very important that people understand that these things really are IN FACT happening in our liberal cities in the USA.

The political gay activist organizations across our country have on their agendas to completely normalize homosexuality in American society. Their goals are slowly being obtained. Their goals include getting hate crimes ordinances and legislation passed at the city / county, state and the federal levels; and the re-education of our society being filled with “comprehensive sex education” classes mandatory for K-12 making homosexuality the same as heterosexuality. This is embraced by Barack Obama and the Democrat Party.

Their agenda is for gay marriage to be accepted in all 50 states, there are currently 3 states that have made homosexual marriage legal, California, Connecticut and Massachusetts. There are several cities, counties and now states that have certain levels of hate crimes policies, ordinances and laws already passed. The educational systems in states where homosexual marriage is recognized are now educating our youth in schools with normalizing “homosexual marriage” as equal to heterosexual marriage. Therefore the gay agenda push nation-wide is to teach the other alternative “homosexual family” as legitimate in public schools. There are several cases across the country to promote homosexuality as normal as heterosexuality. If a concerned citizen confronts the issues they will be: at least fined, at the most go to jail as was in the David Parker Case in Massachusetts. There are cases in Pennsylvania, Oregon, California, New Mexico, Massachusetts, etc.

We are hearing nothing in this political race by either party about the Defense of Marriage Act (DOMA) being repealed by the Democrats, the federal “hate crimes” bill being pushed in Congress, and Employment Nondiscrimination Act (ENDA).

Obama supports homosexuality, distorts the Scriptures for this agenda, and desires the repeal of DOMA.

Obama and Democrats desire homosexuality in the military to be promoted. No one is talking about how “gay rights” laws will indeed threaten religious and other free speech freedoms, and no one is talking about how the gay political agenda and the Democrats desire to redefine family and promote homosexual adoption of children by the thousands, while heterosexual couples will wait in line because of affirmative action.

What happens when homosexual behavior is left unchecked by authorities? This is very disturbing See Below for the most unbelievable links to homosexual activities in our nation!

Hate Crimes Legislation Seems Admirable, BUT the Laws are Designed to Stop Freedom of Christian Speech in Speaking Out Against Homosexuality as Sin

Bible A Hate Book In Canada

It has already happened in Canada, and the USA is next. It is now illegal to speak out publicly in Canada under new hate crimes laws / hate speech laws.

A few pastors have been prosecuted with fines, and one huge pending case is the Stephen Boissoin http://www.lifesitenews.com/ldn/2008/jun/08060902.html

He usually has updated information. Please pray for Stephen to stand strong and speak the truth in love.

The HRC in Canada is now going after another Catholic priest.

Other Cases Concerning “HOMOSEXUAL RIGHTS” for your review, this is starting to happen all too often now.

Massachusetts: David Parker, concerned father goes to jail, because he did not want his kindergarten son to be taught homosexuality as normal in school.

SMITH COLLEGE: Lesbians Storm Meeting In College of Republican Meeting on Born Gay Hoax and Cause RIOT! College President does nothing.

NEW MEXICO: Lesbian Couple Sues Photographer in New Mexico and wins their case against a Christian couple’s photography business – they would not photograph the lesbian couple’s wedding.

NEW JERSEY: Lesbian Couple Sues Ocean Grove Camp Meeting Association / Methodist Church in August 2007 because the lesbians desired to use the church’s PRIVATE property, a pavilion on the beach for their civil union – gay wedding – the church denied their request based upon their Christian Tenants. This case is still pending. The church counter sued state of New Jersey based upon the First Amendment protection. Read Story and Related Links

Three states now have gay marriage thanks to liberal pious black robed judges in California, Connecticut, and Massachusetts. This will cause chaos for other states. The family legal problems to come in these 3 states will cost tax payers hundreds of millions of dollars in the coming years. Watch the states of Arizona, Maine, New Mexico, Florida, Oregon, Washington, Hawaii and all of the New England states as gay activists have strongholds in moving forward with their political agenda for gay marriage and the redefinition of the family.

Ex-gay mother, Lisa Miller is fighting her former partner for custody of her own biological child, Isabella. Liberal courts in Vermont could rule to give custody to her former lesbian lover. This would never happen if this was a divorce with a man who was not the biological father.

What happens when homosexual behavior is left unchecked by authorities? WARNING… the links to this information below are ugly and pornographic in nature.

Gay Orgies with all kinds of sexual activity, Public Nudity, Sadomasochism with children present, all outdoors in the streets of San Francisco which are permitted by the city to have Gay Fair(s), yet Democrat Speaker of the House, Nancy Pelosi will NOT condemn such activities in her district. The SFPD (police) in San Francisco do nothing to enforce public decency laws. Mayor Newsom of San Francisco supports the gay fairs with all this unbelievable activity as well. This kind of behavior is spring up all over the country in places like Key West & Miami, FL, New York City and New York, Boston, Massachusetts and other liberal cities. Even in my home city of Oklahoma City the Gay Pride Week Parade and block party (click gallery) was filled with decadence and declarations of advancing homosexuality.

IN CLOSING: Other Articles for Your Consideration

The END of “We the People” – A Obama Presidency ~ Gay America! by Cal Thomas

Does Same Sex Marriage Affect YOUR Marriage? by Focus on the Family

Silencing The Christians - Excellent Resources of Online Documentary Videos address many more cases in the USA and Canada where the liberal movement is determined to stop the voice of Christians, churches, ministers, and ministries. These video news reports are shocking to most unaware Christians.

In closing please know that I am very sympathetic to the man or woman who is struggling with homosexuality. It is an incredibly difficult struggle. I have devoted over 24 years in helping people leave homosexuality behind so they may find an intimate relationship with Jesus Christ as Lord. I know first hand the pain of living in the deception of homosexuality as I was delivered 26 years ago. I don’t offer up this information in a spirit of condemnation, but rather to expose the path of brokenness the homosexual life brings and what the gay political agendas’ desire is in redefining sexuality in United States of America. I encourage you to search on the internet about related stories and educate yourself and your friends. It really does concern me. I hope you will pray with me... God have mercy!