This is Stephen’s report.

“Why on Earth would you be out at the gay pride celebration Stephen? You have no business being at a gay pride parade!”   At first, it may seem reasonable to rebuke a minister of the Gospel and the director of an “ex-gay” ministry for attending a gay pride event. As an ex-gay myself, it sounds reasonable even to me that I had “no business being at a gay pride parade.” After all, I am Biblically charged to resist even the appearance of evil. The thought was that I might myself be tempted or, at the least, that my appearance there might lead some to believe I have compromised my personal and biblical beliefs, thus compromising the work of ministry and diminishing the effectiveness of those ministering alongside me at First Stone. I assure anyone who questions my presence there that I was under authority, surrounded by powerful accountability and had the necessary boundaries in place to keep me safe enough. Through preparation and prayer, we embraced this opportunity to serve people with the love of God, and plant seeds of truth to make a difference in the eternal kingdom of God.

Those who know me well know that I didn’t want to be at a gay pride celebration. I grieve when I see the craziness in all its fractured variety. . . to put it mildly. Jeremiah Herrian of Forgotten Ministries and Jeff Jackson, 40th Street Baptist Church’s interim pastor, asked me to join them in an outreach ministry. God had placed in and on their hearts to make a difference for the Gospel’s sake by being kind to the pride participants by providing free food and water, contrasting the unkindness the local church often demonstrates towards people who declare themselves gay. 40th Street Baptist Church committed itself to overcome evil by doing good. By making themselves available to pray and witness to people, church members believed the Lord would open doors. Being present to see the Lord work truly blessed and challenged me. My heart needed to know and experience HIS love in a much deeper and profound way for the lost, and I was sincerely overwhelmed by the love of God,  yes, at a Gay Pride Parade. 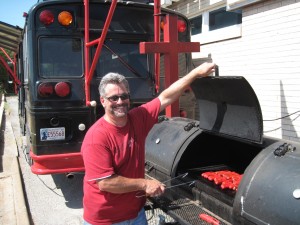 Before the parade began, Stephen Black was able to teach the Christian volunteers how to minister to the homosexual with compassion and truth. Here, Stephen grills hot-dogs to give away to those at the parade.

How did the blessings unfold?

Jeff and Jeremiah’s plan was to be present at the celebration and parade, and to give out barbequed hotdogs and ice cold water along with all the fixin’s, chips, candy, watermelon and cantaloupe. Jeff asked First Stone staff and volunteers to come on Sunday morning to talk about the do’s and don’ts of ministering; and to share from our experience what truly is effective. It was a wonderful opportunity to teach "Homosexuality 101" and present to people the love of God. Forgotten Ministries’ bus includes a pop-out stage and sound system. Jeremiah brought a huge grill and we began cooking. We set up tents, and Jeff’s volunteers graciously provided food and water to anyone who wanted it. A colorful tract attached to the bottles of water expressed the genuine love of God for all people. We went from tent to tent, tail-gate to tail-gate to invite people to receive free food and water. “What’s the catch?” several asked us. Our response? “No catch, we just a want you to know God loves you.” NW 39th St. was lined with thousands of people stretching over a mile long. By being courageous enough to answer God’s call, the 15 workers in our outreach tent were able to talk to hundreds of people. 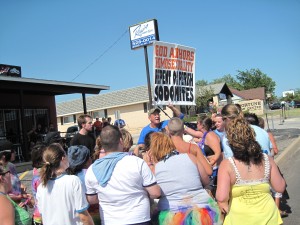 The crowd pressed in on the GHF Preacher, it was a circus like atmosphere.

The gay pride event attracted thousands, including the “God Hates Fags” (GHF) people. While these demonstrators were not from Westboro -- the original GHF people – they were very close in spirit and boldness, quickly turning their presence at the event into a circus show. “Disgusting sinners! Sodomites! You are corrupting the Earth, destroying families and you are all going to hell unless you repent,” screamed the GHF preacher through his megaphone, surrounded by GHF members carrying signs condemning the gay community. “God’s wrath is upon you!” He screamed repeatedly, proclaiming the law of God in a seemingly endless rant that merely infuriated the crowd. The police stood by in concerned amusement. Whatever message the GHF may have thought they were communicating was ineffective, as the gay community heard nothing but hateful judgment, something all-too-familiar to them. Grieved to the point of feeling ill – and not because of the 100 degree heat -- I was also convicted at my own internal judgments at the brokenness I witnessed all around me. In a tent next to ours, a leather-clad transsexual with whips and chains was beating another lesbian friend for “fun.” All around me I could see and hear the damaged ones “celebrating” their pride. It was a very bizarre scene, and I found myself dealing with my own judgment. The sin of the people was obvious, to be sure, but it caused me less pain than to see the Church as represented by the rants of the GHF preacher and the condescending judgment of the four other quiet, yet very conspicuous sign-holding condemning Pentecostals with the Leviticus 18:22 signs, reading “ABOMINATION!” My Pentecostal brethren were very conservative in their white shirts, ties and long jean skirts, contrasted in the unbearable heat by the flamboyant and scantily-dressed partiers, melding together into a very bizarre picture. The display of self-righteousness was over the top. Unable to contain myself as the heart-break of the Lord consumed me, I confronted the GHF Preacher, only to find his resolve strong and his ears deaf. First Stone Intern Chris Johnson, quietly weeping and praying, offered the GHF preacher a bottle of water, as I turned my attention to the squad of four with their signs of condemnation, including an older gentleman who was pastor of a local church. I spoke to him about how to effectively reach out to the lost, but my bottom line question was this: "Can we reach a condemned people by standing in self-righteous judgment holding signs condemning them even more?" 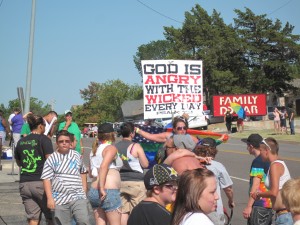 The GHF Preacher continued on all day.

He hesitated and I sensed that the question seemed to make sense to him. I gave him my card and told him if he really wanted to make a difference by ministering to the gay community he could contact me and we would talk. The GHF preacher, on the other hand, would hear nothing. I could only pray that his eyes would be opened and his self-righteous hatred would be minimized.

As we continued to minister from our tent, a lady stopped and asked, “Are you all like those Christians?” Because if you are, I don’t want anything from you! My father committed suicide last year because of people like these hateful, so called Christians!” The pain in her words pierced me and I was struck with more broken-heartedness. I told the woman who we are and what we were about. I apologized for the Church. I cried and told her how sorry I was for her loss. She let me pray with her and I hugged her. She told me that we restored some hope in her life, that maybe there are real Christians.  Even in this quiet moment of ministry, I was overwhelmed by the GHF preacher’s continued ranting. Predictably, the lesbians and gays mocked him, mooned him and returned his screams.  At this point, the Spirit of God came upon me! Positioning myself in the middle of the street, I started screaming at the entire block, pleading for everyone’s attention. For just a second it was almost silent. Even the GHF preaching stopped, and I took advantage of the pause to proclaim at the top of my lungs: “We are real Christians and we are NOT like this!” “God loves you! GOD LOVES YOU!” I screamed at the top of my lungs as I began to cry. “JESUS DIED FOR YOU! AND WE LOVE YOU TOO! We are here to give you FREE food and ice cold water just because we love you and God loves you!”  Yes . . . they heard me. The crowd erupted in to screams of gratefulness and applause! By the end of the day, we had given out 800 hotdogs and hundreds of bottles of water. Was our effort to show God’s love effective? Yes, it was, as demonstrated by the response of a small group of lesbians: “We don’t necessarily agree with you leaving homosexuality, but we think you are really cool; can we hug you?”  “Of course,” I exclaimed, giving them all a big hug. Their response, in the midst of a chaotic day, broke my heart. I hugged many broken people that day and prayed with a couple more. God was able to turn the GHF preaching into a wonderful opportunity for us to make a difference, a difference that would have been impossible if we had drawn our shutters and waited for the day to pass into history.  Pastor Jeff Jackson used the loudspeaker to ask the entire community to forgive the Church of Oklahoma City. His humble request was met with screams, cheers and clapping. Several of us were able to pray with more people and witness a little. We did not confront the sin of homosexuality, leaving that task to the Holy Spirit. That same Holy Spirit that first confronted me with my need for Jesus over ALL my sins, later confronted my homosexuality. There is a right way to witness and there is clearly a wrong way. Hopefully, my critics will understand now why I was at the OKC Gay Pride Celebration on June 26, 2011. I will never be the same!

“Preach the Gospel all day long and if necessary use words.” St. Augustine

And yes, we must communicate in words the Gospel of the Lord Jesus Christ.