A Must See Heart-Rending Life Story

During the Exodus International Freedom Conference, I and the other delegates received an unexpected blessing.  We were invited by Movie Director Chad Ahrendt to screen his new film, RECONCILIATION. I’d seen the trailer and knew a bit about the story line, so I admit to some pre-conceptions.  “It will most-likely be a nice story, but I doubt it will be a real tear-jerker or pack an emotional punch as others reported,” I thought, and . . .  “it probably won’t convey a real Christian message; it will most-likely compromise in some way.”

WOW, was I ever so blessedly wrong! RECONCILIATION is not only very tastefully done; it is believable, realistic and definitely packs that emotional punch, and not at all contrived.  Based upon a very real and gut-wrenching life story, this movie confronts complicated life issues in an honest way without any sugar-coating.

Just the opening scenes dismissed any doubts on quality. I was concerned that it wouldn't be well-done.  Many low-budget films sacrifice story-telling and film artistry. Again . . .  I was so wrong.  RECONCILIATION is excellent. The actors are professional, believable; the editing and artistry of the film top-notch.  Writer-Director Chad Ahrendt crafted an amazing heart-rending movie.  In meeting with Chad, I could see that his personal passion is reflected in his artistic expression.  This movie affirms his depth, conviction and vision. I’ve seen a lot of movies in my time; this one is definitely on the top of my movie list, EVER!

RECONCILIATION provoked a lot of questions for me.  Why does this movie so bless me?  Will it bless others as deeply?   Why do I feel so strongly about this movie in particular? Are my strong feelings only because I can SO relate to this movie in SO many ways? Is it because I lived as a gay identified man for eight years? Is it the acknowledgment in the film of the struggles I have lived over the past 28 years within the Church and in ministry? Is it because I know what it is like to hate my father and then to be reconciled to him? Is it the raw emotional impact of the movie’s closing scenes, so similar to scenes I lived out with my own father?

The answer to all of these questions is “yes.”

Some who know me might just say, “well that’s Stephen, he’s so emotional.”  And, it’s true. I am.  However, it would take a hard-hearted soul indeed to not be moved by this movie.  People in audiences vary greatly in everyday emotional expression, but all were clearly moved to tears at this screening. Was it because these viewers were delegates to the Exodus International Freedom Conference?   Perhaps that plays a part because they can so relate. But I think it goes well beyond that.  People love it when reconciliation takes place and the truth is presented in a real life story.  It gives us all hope as we view whatever brokenness lies around us, and that reconciliation is possible. 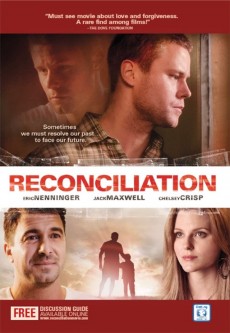 My tears began to flow in the middle of the movie and were present through the final credits.  My heart leaped for joy when the truth was presented to the Dad-Jeff McDowell, (played by Jack Maxwell).  The presentation of truth is so freeing . . . and I was finally able to let my guard down and embrace this beautiful movie. This movie affected me so deeply because it is obviously truthful to real life. It confronted my own need to love more deeply and in truthful compassion. It demonstrates deep LOVE and FORGIVENESS.  The power of grace is presented and treasured. My tears flowed as I relived my relationship with my own dad though this message of hope and great kindness. The Son-Grant Taylor, (played by Eric Nenninger) demonstrates accurately the battle that many Christians have in dealing with a loved one in homosexuality; yet the Son-Grant prevails with dignity, love and forgiveness.

RECONCILIATION reveals how very kind and long-suffering God IS with every last one of us. So many gay men and women have been deeply wounded by the Church; God desires reconciliation.  Here we see it and it gives us hope.

The movie is honest and realistic, revealing varying views on the issue of homosexuality. Thank God it rises above the temptation to be politically correct and commits itself to just be about real life and the struggle we all face to overcome grief and hatred.  It respects the real “issues” of hurt from both perspectives, gay and Christian.

I highly recommend this movie to everyone I know, gay, straight, Christian or uncertain. This is a must-watch movie for everyone that has been touched by the issue of a gay lifestyle.  Whether you have a loved one involved in  homosexuality, or you are someone trying to reconcile your own homosexuality/same-sex attractions and Christianity, this movie will speak to you in your journey.   Every Christian should see it to help us deal with the issues with which our fellow brothers and sisters struggle in the Church and those who struggle outside the Church.

A film about the issue of homosexuality and the impact it has on families must, to be real, express the raw emotions of misunderstanding and pain.  That realistic expression makes this movie a bit intense for children.  The film does not avoid the impact of living in a fallen world. However, this movie is not just for those who struggle with same-sex attractions or those with surrounding relationships.  It is for anyone who desires forgiveness and to love more deeply.  It is for those who hope for better relating in any broken relationship.

Chad Ahrendt created an excellent and impacting movie; one he will never regret.  As a courageous telling of the truth and a willingness to look beyond what many deny, this movie has the potential to be a sneaker-blockbuster. Some may mock it, as they did Mel Gibson’s the Passion of The Christ movie.  Remember, many mocked the Billy Graham Association, saying The Hiding Place was lame. However, both movies are timeless and continue to express powerful truths.  Both movies are watched over and over and are becoming multi-generational.  RECONCILIATION will join these two as one of my favorite Christian movies. Why?  Because RECONCILIATION is truly redemptive.  Yes, it is the story of reconciling a father to his son, but it speaks to the inner need of all us, the desire to be reconciled.  I loved this movie and I will definitely see it again on the big screen, with friends and tissues.

Please join with me in supporting the message of RECONCILIATION and help bring it to the Big Screen in your community.