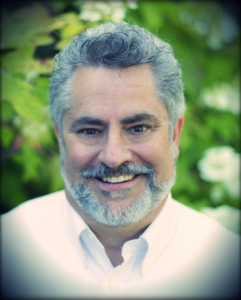 Stephen Black has been the Executive Director of First Stone Ministries since 2000. Stephen has worked in full-time Christian ministry and in leadership with First Stone Ministries since 1993. He was ordained with International Ministerial Fellowship in October of 1994. Stephen is an author of many articles and teaching aids. His new book released October 10, 2017, Freedom Realized: Finding Freedom from Homosexuality and Living A Life Free from Labels and the companion book/report "The Complete First Stone Ministries Effectiveness Survey Report" was released in June of 2018 as an ebook, and the softcover released August 30, 2018.

The ministry Stephen directs is First Stone Ministries, located in Oklahoma City, which receives its name from John 8:7, ”Let him who is without sin cast the first stone.”  First Stone Ministries specializes in ministering healing and restoration to those caught in all forms of sexual brokenness, including sexual abuse, pornography addiction, and homosexuality.  First Stone was incorporated in 1976. Stephen began his ministry through pastoral discipleship counseling in 1985 and now continues to teach and serve people in one-on-one discipleship sessions, group sessions, and speaking at conferences. He has spoken in interviews numerous times on local and national radio and television programs over the past 35 years. Stephen speaks on issues of sexual and relational brokenness. Stephen served on the Restored Hope Network (RHN) board of directors as one of the original founders for seven years, (2012-2018). The Restored Hope Network was formed in June of 2012 to regroup most of the decades-old biblically orthodox ministries to the sexually broken after the failed leadership and closure of Exodus International. He has also ministered in prisons as a volunteer chaplain and has served on several ministry boards. Stephen also serves on the Board of Parents, Families, and Friends of Gay and 'Ex-gays' (PFOX), and currently is serving as one of nine committee members with the Gone Too Far movement. Stephen enjoys testifying, teaching/speaking and writing on God’s amazing grace to save souls and heal the roots of relational and sexual brokenness in God's sanctifying processes.

Stephen was called by God into ministry through the healing he received himself: (2 Cor. 1:3-4). As a survivor of childhood sexual abuse, he was wounded and confused during his teenage years, drawn into homosexuality; and lived gay-identified for 8 years. Stephen’s 1991 written testimony is online in several locations and a video testimony is online here.  Acquainted with the grief of sexual sin and abuse, Stephen’s heart is to make known what he discovered - that Jesus Christ has come to set the captives free, and that the grace of God is transformative, that The Gospel of Jesus Christ changes lives! —

Stephen’s statement of his personal history

I have lived my entire life in the Oklahoma City area.  My wife of 34+ years, Robin and I have three beautiful adult children (Mandy, John & Charity).  Charity went to be with the Lord on April 24, 2012. Although we grieve, we have not lost hope.  God has blessed us with three (four by marriage) absolutely wonderful GRAND-children.

My wife and I are animal lovers, enjoy nature, patio living, swimming, and bird watching. The most important thing about me: I am in love with GOD, and His perfect ways. I really do want to be more like Jesus Christ, and yet I fail in so many ways. I long for Heaven; I think about Heaven every day. I love the Holy Scriptures! I love teaching from the Scripture and learning from God’s Word. I love my wife, Robin, and our 3 beautiful children. I never want to do anything to hurt them. I regret my past, but I do not live in shame any longer. I am a loyal man. I despise lying and betrayal. I long for integrity to be consistent in all. I want to be a good friend! I long for truth, in relationships good, bad, and/or ugly. It is what it is, and I will tell it like it is.  I am also very interested in politics, public policy, and making a difference for righteousness in our constitutional republic.

It is interesting to learn about a person’s name from God’s perspective; I believe our names are a picture of a prophetic word over our lives. My full name is Stephen Howard Black. Stephen is from the Greek meaning “crowned one" or "one of highest quality” and my middle name Howard is old English meaning: “watchword, one who watches over the word, or one who gives divine guidance” and my last name is Black, coming from Black Smithing or working with metal. Therefore, my name prophecy is one who will give the highest quality of divine guidance, the one who watches over the word by forging the metal of truth.  I was amazed at this prophetic word, as this lines up with what I hope God will accomplish in my life in ministry. —

Blog Disclaimer: This is the personal blog of Stephen Black. The views expressed or communicated in any way contained herein under stephenblack.org are Stephen Black's alone. My viewpoints do not represent the views of any other person or of any other organizations. However, there will be direct links and articles that are from other sources. Other posted sources will be clearly communicated as such, otherwise, the content on this blog, is personal to Stephen Black's thoughts alone. There will be a consistent presence of social and spiritual issues that I will blog about. During elections, no doubt I will have many political opinions and links. As one who has overcome a history of addiction to sex, drug use, sexual abuse, sexual distortions, and severe identity conflict in homosexuality I will have many postings on these subject matters. I will, of course, want to post other assorted personal interests.