One bright day, in the state of Confusion, a scruffy-faced man in Divers City felt a little flutter in his belly. As the days went by, the flutters grew stronger until they felt like little kicks.

"I'm pregnant!" the man gushed as he hugged his girlfriend.

"It's a miracle!" the media proclaimed, as they paraded him around the talk show circuit. Some people said it wasn't possible, but the media ignored them.

Suddenly one night, the man sat bolt upright in bed. Shaking his girlfriend awake, he said, "My water broke!" This produced a frenzied search for the suitcases and car keys, and a mad dash to the hospital.

Pregnant man in tow, the girlfriend picked up her cell phone and dialed ABC, NBC, CBS, CNN and Oprah. By the time they got to the hospital, it was a media circus. Cameras rolling, the flashbulbs flashing, the pregnant man was wheeled into the hospital to deliver his baby.

Several hours later, the weary girlfriend stepped out of the hospital room and announced to the camped-out media, "It's a girl!" Demanding video footage and pictures, the media crowded into the room.

As cameras clicked and videotape rolled, one reporter noticed that the baby was moving its mouth. "Quiet!" he yelled. "The baby's trying to speak!"

The crowd hushed as the precious newborn looked up into the face of her father and said, "Mama!" A horrified silence fell on the room.

Nervously, the man looked down at his daughter and said, "No, child. I'm Dada."
The baby smiled and reached her little hand up to caress the man's scruffy face. Again she said, "Mama!"

A single tear streaked down the man's cheek as, for the first time, a feminine softness crept into his face.

"It's true," said the man, as gasps trickled throughout the room. "I am your Mama. How did you know?"

With a twinkle in her eye, the baby said, "Silly Mama. Only girls can have babies!"

from Concerned Women for America – CWA
Used with permission ©2008 CWA 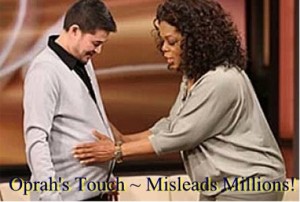 Oprah Winfrey just loves a sensational story!  She just cannot keep her hands off of it!  Oprah enjoys pushing the societal norms with immorality under her banner of niceness!  Very sad.