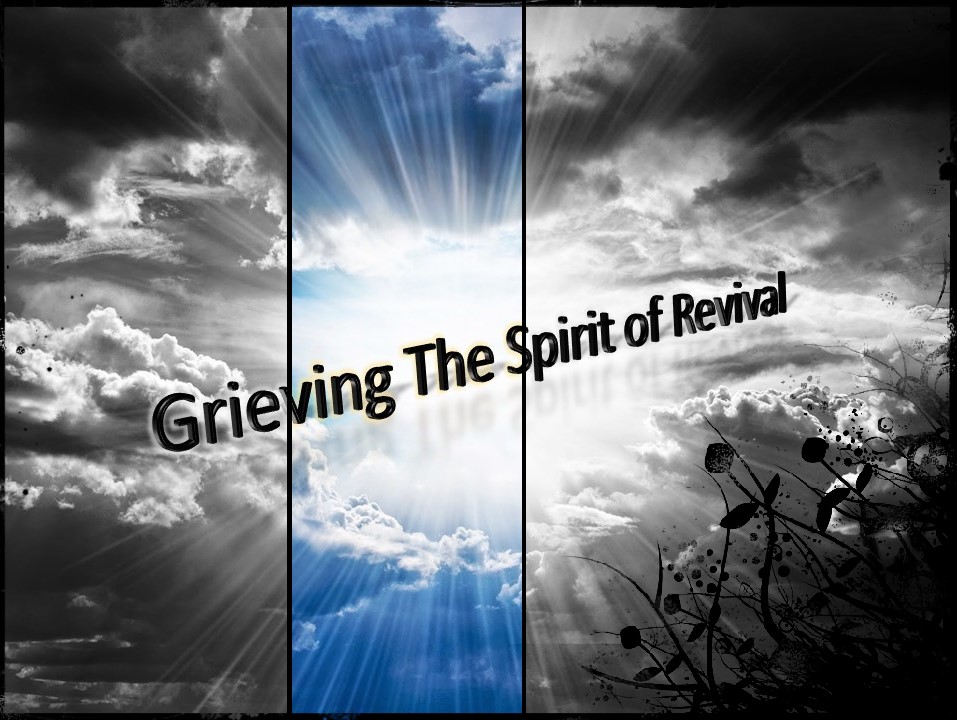 A true revival is preeminently the work of the Holy Spirit, and the depth and magnitude of the work depends largely on the number of people who are in perfect union with the Holy Spirit. In times of revival all spiritual forces come to a crisis, both good and bad. Satan is on hand to muster all his children against a thorough work of grace. He will also be busy in society, devising all sorts of social matters against revival. He will influence all weak, half-hearted believers in every way against a thorough work. He will do everything to discourage workers. He will make them sick or cripple their zeal, or tempt them in some way to grieve the Holy Spirit. The Spirit is more frequently grieved by hidden things than by things which are outward and visible. In times of revival it is almost impossible to get six persons out of a large community, who in heart perfectly agree. There may be an outward profession of unity, and no one may detect any definite sign of disharmony, yet the human heart is so deceitful, and the interior conditions of perfect harmony require such utter unselfishness and transparency of spirit, that very few persons ever comply with them in the sight of God. The following are some of the things that grieve the Holy Spirit and hinder Him in revivals:

1. A CRITICAL SPIRIT. I do not mean the open rebuke of sin, for this is commanded in God's Word. Neither do I mean the just rebuke of ill-behaved persons in a meeting, for this is a necessity, and no company of worshipers should be disturbed by misconduct. But I mean those who claim to be in sympathy with God's work, yet they have a critical spirit against the leaders of the meeting, or the methods of work that may be adopted. Even though this criticism is not outspoken, it greatly hinders the Holy Ghost. There is often in the church a whimsical stubborn fault-finding disposition. A watching for defects among God's children, a picking out of blemishes in the singing, or the praying, or the preaching. All this forms an enormous barrier to the flow of the Holy Spirit. Such persons are deceitful, hard to please, and whatever excellencies they may have they are a definite hindrance to God's work. There is always a company of evil spirits that cluster around such persons to neutralize all the good they attempt to do.

2. THE SPIRIT OF FEAR. Timidity, moral cowardice, the fear of public opinion, the fear of relatives and friends, which prevents persons from taking a bold, decisive part in the church. Which prevents them from leading in prayer, or giving public testimony, or speaking to souls on personal salvation, all this fearfulness of spirit greatly grieves the Holy Ghost. Some are afraid that God will overburden them with work, or make demands of consecration beyond their strength, and so they fail to yield themselves fully to the Lord. While they may try to busy themselves in the church and think they are helping wonderfully, yet by that HIDDEN, miserable fearfulness of heart, which is the very essence of disobedience in the sight of God, they greatly hinder the power of the Spirit!

3. SELF-OPINION GREATLY GRIEVES THE SPIRIT. Many a revival is utterly prevented because prominent ones in the meeting stubbornly hold on to a wrong education, or to old theological notions. Some may have anti-scriptural views concerning inbred sin, or growth into heart purity, or the annihilation of the wicked. Others may be prejudiced against the manifestations of the Spirit, or divine healing. These things are unseen hindrances to the operation of the Spirit. Teachableness of mind, a perfect willingness to have only scriptural views, is a prerequisite condition for the descent of the power of God.

4. A SPIRIT OF RESERVE WITH GOD IS ANOTHER GRIEF TO THE HOLY GHOST. In every revival there are so many whose inner nature is tied up with a cautious conservatism, that persistently holds them back from a full abandonment to God and His work. They will boast of wanting such wonderfully great things. Yet there is an unexpressed unwillingness to be and do all the Lord wants, or to suffer all the Lord wants them to suffer. They are consciously holding themselves back, lest they should slide down some steep place and get drowned in the ocean of God's will. This internal checking of themselves not only prevents their own full salvation, but hinders the Spirit from using them for the blessing of others.

5. SELF-PLANNING AS TO GOD'S WORK. At the beginning of most every revival, it is almost a universal thing for those who are most interested to form some plan in their own mind as to how God ought to come and how the work ought to be done. Each one forms a standard as to who should lead the work or how it ought to be conducted, or what divine demonstrations should occur. So there are a large number of mental schedules which are invisible to mortal eyes, but which bristle like antagonistic bayonets before the all-seeing eye, and the blessed Holy Ghost who reads the thoughts and interests of the mind, finds Himself dictated to, by the very people who outwardly profess that they want God to have His way.

6. THE SPIRIT IS GRIEVED BY OUR HAVING LIMITED VIEWS OF CHRIST'S POWER. Oftentimes God wants to begin with the leaders of a meeting and lead them into a fresh baptism of fire or into a new depth of self denial. But their rigid and narrow views of God's saving grace is a definite hindrance to the Spirit's power. As a result, the people under such leadership often suffer with limited views of Christ's saving and sanctifying power.

7. THE SPIRIT IS OFTEN GRIEVED WHEN TESTS OF OBEDIENCE ARE SHUNNED. It may be a question of restitution or reconciliation, or the confession of a backslidden state, or the giving up of some indulgence. There have been meetings where two or three conspicuous persons utterly failed to obey God on some test point, and the work was a failure; the Spirit was grieved away, Satan and his black angels triumphed and the work of God was put back for years.

8. THE SPIRIT IS OFTEN GRIEVED BY OUR UNWILLINGNESS TO GO BEYOND OTHERS. God often wants some of us to go out into His will on lines of prayer and faith and obedience, even beyond what other professors of holiness will consent to. When He calls, if we stop to measure ourselves with others, and compare ourselves among ourselves we may greatly hinder a work of grace. God can overcome the open and recognized hindrances to His work a great deal easier than He can the hidden barriers in the hearts of His people.