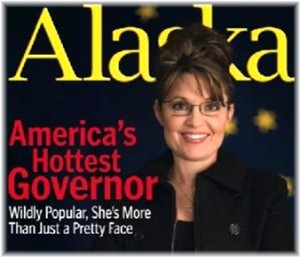 Today history was made; Governor Sarah Palin was selected by John McCain as his Vice-President. I was skeptical at first, but then I listened to this woman speak. WOW! I told my wife, "she's gotta be a believer in Jesus Christ." Knowing nothing about her at the time, but hearing her heart, I knew she must love God. This is the kind of news that makes me shout! Today’s event restored hope back to my heart, finally I feel like I can vote in November with joy!

Perhaps John McCain is actually seeing the need to move closer to the right, rather than playing Washington politics. I am still uncomfortable with Senator McCain’s stand on immigration, McCain-Feingold, and marriage defined and defended as a constitutional amendment – one man and one woman. The Senator has always seemed to be too liberal for my liking. However, after the Saddleback open table discussion with Rick Warren, I began to have a new respect for John McCain. He gave clear concise answers on several issues. When he answer the questions about evil and abortion, I was thrilled. McCain wants to destroy evil and Obama will negotiate with evil. The Bible teaches us that Jesus Christ was manifest to destroy the works of the devil, not negotiate with evil. On abortion, McCain hit a home run! He got it right, truly life begins at conception. But Senator Obama just gave typical Washington political spin; "above his pay grade," very sad!

But today with Governor Sarah Palin selected as John McCain’s running mate, I am very hopeful. Mrs. Palin is a woman who is not afraid to really walk out integrity, be ethical, really serve strongly, and stand against the status quo of politics as usual. Governor Palin seems to be genuine, authentic and sincere in all her beliefs and morals; a real main-stream American and not a career Washington politician. No wonder she has a higher than 80% approval rating in her state, she is believable! I think the American people are sick and tired of all the lying in Washington's politicians. Yes, this is the kind of person I want in the White House! I believe she is a much better pick for President over Obama in the terrible event something was to happen to McCain (God forbid). I thought the Obama camp was foolish today as they attack Mrs. Palin before she even had a chance to give her acceptance speech in Dayton, Ohio. It was laughable, after I listened to talk radio; Sarah Palin actually has more executive experience than Barak Hussein Obama.

Governor Palin is a breath of fresh air from the incredibly beautiful state of Alaska! I am hoping for a great victory for the Republican Party on November 4, 2008! God bless America!