More Scientific Evidence that NO ONE IS BORN GAY!

No one is born gay, and it is time that those who are making such bogus claims, to put up or shut up!  The American public has been lied to for years!  The Simon LaVey report proved nothing and with the actual  current research of all the studies, the verdict is in:  the "gay gene" is nothing but a myth.   This report: “This Is The Way God Made Me” - A Scientific Examination of Homosexuality and the 'Gay Gene'" by Brad Harrub, Ph.D., Bert Thompson, Ph.D., and Dave Miller, Ph.D. is fantastic giving the detailed truth!

The thorough research in the report link above: "This is The Way God Made Me"  should be more than enough!  However it is delightful to see gay activists themselves being honest enough to tell the truth, "No one is born gay, the idea is ridiculous!" - Camille Paglia.

One gay activist recently said:  "We don't care that we are not born gay!  We love our gayness!  Get over it Christian homophobes, deal with it and tolerate it already!"

I think it is time to tell the truth loudly!  You have been lied to America!

Not only does Camille Paglia, speak the truth, but there is the recent work done by  Dr. Lisa Diamond, another lesbian leader.  My friend Karen Booth wrote an excellent article and posted on her blog, and I share it below the two excellent videos:

Are People Born Gay? Genetic and Epigenetic Determinism in Homosexuality

Born Gay? Is Homosexuality Genetic/Biological? - Science Is In: The Short Answer is: NO! - No one is born gay!

BY KAREN BOOTH
Is homosexuality unchangeable? Are gays and lesbians exclusively attracted to their own genders? Does a person who experiences same-sex attraction always proceed developmentally to the acceptance of a homosexual orientation or the adoption of an LGB or “queer” identity? 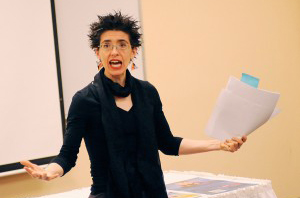 These are the kinds of questions that have intrigued sex researcher Dr. Lisa Diamond, who teaches psychology and gender studies at the University of Utah. A self-identified lesbian and vocal supporter of same-sex marriage, she is considered by many in her field to be one of the nation’s foremost experts on female homosexuality. Her research since the mid-90s has primarily focused on the “fluidity” of women’s sexual behavior, attractions (orientation) and identity labeling; and when she published her findings in 2009 the shock waves were felt almost immediately throughout the LGBT community.
For example, the online introduction to one of her interviews on a local radio station put it this way: “The queer community has been obsessed with cultivating the idea that we all have fixed sexual identities. We’ve crafted terrific narratives and political platforms based on the notions that all gays are ‘born that way’. But what if sexuality is more complex? What if biology actually intersects with environment, time, culture and context? Could we possibly be more fluid than we’ve supposed?”
Now, her more recent discoveries about male and adolescent sexuality ― described in detail in this 45 minute video of a lecture she presented at Cornell University ― are poised to make a similar impact. Diamond is a very engaging speaker, and I encourage readers to watch the complete video. Otherwise, here are some of the highlights along with my commentary in italics. I also noted some of the minute markers in case anyone wants to fact check.
Those uninterested in the data are welcome to skip that section to get right to my conclusions and application to our current denominational situation.

In an overview of her previous research, Diamond acknowledges that early studies of homosexuality focused mainly on the “coming out” models of young men, with the developmental sequence moving from an awareness of same-sex attraction at 9 or 10 years old, to a gradual sexual experimentation with other males, to a recognition and acknowledgement of a homosexual orientation, to an ultimate adoption and announcement of gay self-identity. This stereotypical model, with its subsequent conflation of attraction, orientation and identity, has become the accepted “conventional wisdom” of much of the culture and Church. Christian psychologist Dr. Mark Yarhouse dubs it “the gay script.”

Though her findings on women contradicted these patterns in many respects, Diamond still believed they were common for men. But she also acknowledged that it’s been almost impossible to accurately access male homosexuality because the samples have been small, non-random and self-selected, and the right kinds of questions haven’t been asked. (6:10)The same problem has plagued almost all sex researchers ever since the hopelessly flawed Kinsey studies in the late 40s and early 50s. And all of the studies are based on memory and self-report that may not be entirely accurate. (For more information on the Kinsey reports, see Chapter One of my book Forgetting How to Blush: United Methodism’s Compromise with the Sexual Revolution.)
So in her most recent research, Diamond has shifted her focus from women to men and adolescents in an attempt to confirm or disprove what she calls the three pillars of sexual fluidity ― non-exclusivity; inconsistency between identity, attraction and behavior; and, variability over time. (8:35) In doing so, she rigorously examined and plotted the findings of a dozen of the more recent large population studies from 1992-2010, including one in New Zealand that followed a group of young people from their late teens to early thirties.
Regarding the first “pillar” ― non-exclusivity ― she discovered that the majority of men who had experienced same-sex attraction (SSA) of any kind were PRIMARILY attracted to the opposite sex; those who were exclusively attracted to other men accounted for approximately 2.5 percent of the general population sample. Less than 1 percent of the women were exclusively SSA, and both of these results were consistent across all the studies. (14:36)
These statistics are far more accurate than the commonly heard claim that 10 percent of men and women are gay, usually thought of as exclusively so. That figure is based on a faulty interpretation of the Kinsey research, which actually reported that approximately 10 percent of the male population had engaged in homosexual behavior at some time during their life. Even this outcome was inflated well beyond Diamond’s findings (5-7 percent) because Kinsey used a disproportionate number of incarcerated “sex offenders” and urban-dwelling homosexuals in his sample.
To assess the inconsistencies among sexual identity, attraction and behavior ― the second “pillar” ― Diamond did her own sampling of 300+ Salt Lake City residents who were almost equally divided between those who self-identified as homosexual, bisexual or heterosexual. (20:48) The participants were asked questions about sexual attraction, romantic feelings (“falling in love”) and actual sexual partners. Stereotypically, one would expect to find neat divisions across the three identities. But this was not the case; for example, 42 percent of lesbian women and 40 percent of gay men reported some attraction to the opposite sex in the previous year, and 31 percent of gay men reported having had romantic feelings for women. (26:26) There was even more of what Diamond calls a “mish mash” between identity, attraction and behavior when the study participants had been 12-17 years old.
One of Diamond’s strengths, in my opinion, is that she makes a distinction between identity, attraction and behavior. As mentioned previously, so does Dr. Mark Yarhouse. So does the official teaching of The United Methodist Church.
To track variability over time ― the third “pillar” ― Diamond analyzed the four stages of the New Zealand “National Attitudinal Study of Adolescent Health,” which tracked “gain” or “loss” of SSA among a group of young people at ages 16-17, 18-19, 24-27 and 29-31 years old. (29:00) During their late teens, more boys and girls were losing SSA than gaining, which was reversed by their mid-twenties with more of them gaining, and which was then reversed once more by their early thirties with more of them again losing SSA. This tendency toward fluidity was also evident in the measurements of gain or loss of opposite sex attraction (OSA), especially in their early twenties and early thirties. However, in contrast to the females, male attraction did tend to become more “fixed” over time, though not to the degree that Diamond expected. It would be interesting to see the results extended as the group continues to age. 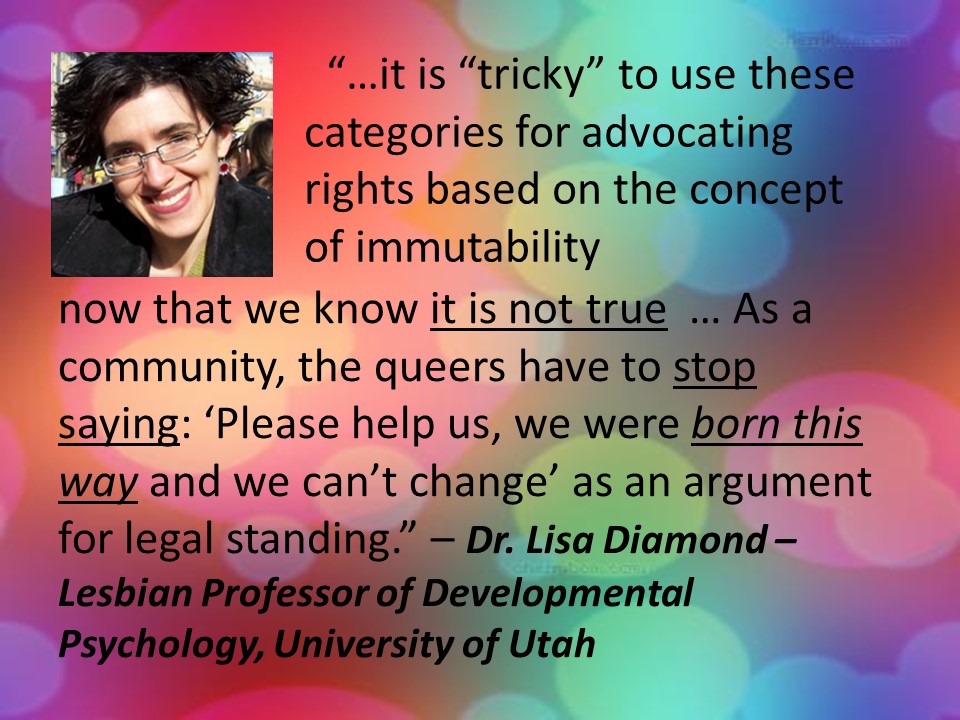 Diamond concludes (37:27) that: 1. fluidity in identity, attraction and behavior is NOT specific to women but a general feature of human sexuality, one which is also confirmed by historical and cross-cultural literature; 2. the various sexual categories currently in use (LGBTQI, etc.) are usefulheuristics (mental shortcuts, rules of thumb, educated guesses or stereotypes), but though “they have meaning in our culture, … we have to be careful in presuming that they represent natural phenomena” (38:55); and 3. it is “tricky” to use these categories for advocating rights based on the concept of immutability “now that we know it is not true … As a community, the queers have to stop saying: ‘Please help us, we were born this way and we can’t change’ as an argument for legal standing.” (43:15)
My own major takeaways: If you’ve followed my post this far, you may be wondering what all this fascinating (or not) information has to do with Christian faith or The United Methodist Church. John Wesley, the founder of Methodism, utilized the concept of “plundering the Egyptians” to express the idea that Christians should borrow from all the best that culture has to offer in order to grow in knowledge and faith and to effectively share the gospel. I think that some of Diamond’s work falls into that category. Her political commitments make her no particular friend to moral traditionalists. But nonetheless, her research is an example of honest and relatively impartial scientific inquiry that refutes several of the false notions about homosexuality that pervade our culture and Church ― including the belief that the inclination is immutable and cannot be changed.
And even more to the point, Diamond’s research unwittingly confirms the potential for sexual transformation that is alluded to in 1 Corinthian 6:9-11. If the verse “such were some of you” accurately describes the men and women whose sexuality changes naturally through the course of their lives, doesn’t it apply even more ― and bring additional hope ― to those who submit their fallen and sinful sexuality to the redeeming, sanctifying supernatural grace of Jesus Christ and the Holy Spirit?
We’re living in a time when more and more people, especially youngsters, are buying into the “gay script.” And we’re also living in a time when LGBT political activists are doing everything in their power to legally prohibit and criminalize Sexual Orientation Change Efforts or SOCE. A solid understanding and clear communication of the “good news” of Dr. Diamond’s work gives believers one more tool for countering these ungodly trends.
And maybe someday, with God’s help, the rest of the secular therapeutic community ― along with politicians, academics, media elites and the culturally conditioned folk in our pulpits and pews - will catch up to her.
Tweet