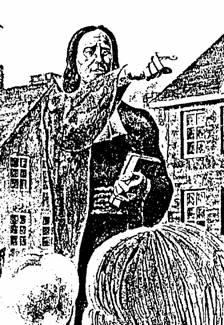 John Wesley lived in the 1700's, and was perhaps England's most famous evangelist and preacher. His writings, preaching, and life ministry have made a tremendous impact on the Church as a whole. This article was taken from "The Complete Works of John Wesley," published by Baker Book House. As our brother John urged, read this message with a prayerful, open heart.

"If anyone wishes to come after Me, let him deny himself, and take up his cross daily, and follow me." - Luke 9:23

Denying ourselves and taking up our cross isn't a little side issue - it is absolutely necessary to becoming or continuing to be a disciple of Jesus. If we don't practice self-denial, we aren't His disciples. It's useless to try to follow the One who was crucified without taking up our own cross daily. Unless we deny ourselves, it will be impossible not to deny the Lord. But so many who have written about self-denial (some of them large volumes) don't seem to have an understanding of the subject. Either they couldn't explain it to others, or they didn't know how far to take it, or they didn't sense the absolute necessity of it. Others speak of it in such a dark, mystical way, that the average man can't understand what it's supposed to mean.

Still others speak very clearly on the necessity of self-denial, but they never get down to any specifics about what to do. And if some of them do get specific, they only talk about those things that hardly affect anyone, since they almost never occur in common life. They speak of things like enduring imprisonment or tortures, giving up houses or lands, husbands or wives, children, or even life itself. But most of us aren't likely to be called to endure things like these for the Gospel, unless God permits times of public persecution to return.

What does it mean for a man to "deny himself, and take up his cross daily"? This is something which is so,so important to understand, because many powerful enemies oppose this Christian doctrine stronger than they oppose any other aspect of our spiritual lives. All of our natural feelings rise up against any kind of self-denial, and we immediately look for reasons to excuse ourselves from it. Those who love the world hate the very sound of it. And the great enemy of our souls, knowing full-well its importance, tries to roll every stone against it.

But this isn't all. Even people who have pretty much shaken off the yoke of the devil, and who've sensed the work of God in their hearts, don't seem to know much about this central doctrine of Christianity. Some are as deeply and totally ignorant about it as if there wasn't one word about it in the Bible. But self-denial is something that their Master insists on.

Others are even further off, having accepted a strong prejudice against it. They've gotten this idea from shallow "Christians" who like the easy things of life, and who don't want anything of godliness except the power.

It's not enough for a minister of the Gospel to not oppose the doctrine of self-denial. If he wants to be pure from the blood of all men, he must speak of it often, showing the necessity of it in the clearest and strongest way. Can you see how you're in constant danger of being fooled, cheated, or ridiculed out of this important command of Jesus, either by false teachers or false believers?

In the meantime, a good understanding of what self-denial really means is badly needed. And once you know what it means, you need to learn to practice it as a way of life.

All of the things that hold us back from being right with God or growing in the Lord can be boiled down to this: either we won't deny ourselves or we won't take up our cross. Let deep prayer go before, accompany, and follow what you are now about to read, that it may be written in your heart by the finger of God, never to be erased.

I'll try to show, First, what it means for a man to deny himself and take up his cross; and, Secondly, show that if anyone isn't fully Christ's disciple, it's always because he won't obey this command of Jesus.

What is self-denial? How do we deny ourselves? Why do we have to? Self-denial is simply denying or refusing to follow our own will, from a conviction that the will of God is the only right way.

The first reason that God should be totally in charge of our lives, instead of us, is because He made us. "It is He who has made us, and not we ourselves." (Psalm 100:3) It's only a natural result of the relationship between man and his Creator. If God's way is the right way in everything, big and small, it follows that we shouldn't go our own way in anything. Self-denial holds true for the angels of God in heaven as well as with man, innocent and holy, as he came out of the hands of his Creator.

The second reason that God should be totally in charge of our lives is because of the condition that all men are in since the fall. Our own will leans toward indulging our natural desires. But it's God's plan and desire that we resist and overcome that temptation, not at some times or in some things only, but in all times and in all things.

Without a doubt, it's more pleasing, for a while, to follow our own will and desires. But by following our desires in anything, we strengthen the rebellion of our heart. So, by eating the food we enjoy, we often increase a bodily disease. It satisfies our taste, but it makes us sicker; it brings pleasure, but it also brings death.

On the whole, then, to deny ourselves, is to give up our own will, no matter how much we may want our own way, whenever it doesn't fall in line with the will of God. It's to deny ourselves any pleasure which doesn't come from, or lead to, God.

Taking Up Your Cross

In our daily lives what does it mean to take up your cross? We need to find out, because everyone that wants to follow Christ must not only deny himself, but take up his cross as well. Taking up our cross means doing anything that goes against what we would choose to do. So taking up our cross is a little harder than denying ourselves. It rises a little higher, and is more difficult to flesh and blood. Even though it may sometimes be hard to give up our own pleasure, it's easier to do that than to take up hardship and endure pain.

Now, in running "the race that is set before us" according to the will of God, many times there's a cross lying in the way. That cross is something which will not only bring no pleasure, but something that is a burden or a pain. Picking up our cross is not just denying ourselves something that is pleasurable, it is allowing something that is unpleasurable to enter into our lives. What do we do when we are faced with this? The choice is plain: either we take up our cross, or we turn aside from the way of God.

In order to bring our lives back in line with what the Lord originally intended us to be, it's often necessary to pluck out, so to speak, an eye, or to cut off a right hand. We're so attached to some habits of sin that we can never be separated from them without intense pain. The Lord then purifies the soul like a refiner's fire, to burn up all the impurity. It's painful all right, and it must be, because the soul cannot pass through the fire without pain.

If God puts us through any kind of pain, it's only in order to heal us. Jesus is our Great Physician and He cuts away what is infected or rotting, in order to preserve the healthy part. And if we would freely choose the loss of a limb, instead of letting our whole body perish, how much more should we choose, figuratively, to cut off a right hand, rather than to have our whole soul cast into hell!

When our Lord said to the rich young man, "go and sell al that you possess, and give it to the poor"(knowing this was the only way to heal his greed), the very thought of it gave that young man so much pain that "he went away grieved." (Mark 10:21-22) He chose to part with his hope of heaven, rather than part with his possessions on earth. This was a pain he would not agree to endure. A cross he would not take up. And in one way or another every follower of Christ will surely have to take up his cross daily.

Taking up our cross doesn't mean literally tearing our own flesh, wearing uncomfortable clothes, purposely exposing ourselves to extreme heat or cold, or anything else that would hurt our bodily health. It means embracing the will of God, even though it may be totally different from what we want. It means choosing the good, though it may be bitter medicine. It means freely accepting hardships, trials, and temporary pain of whatever kind, as we walk on the path of eternal life.

Secondly I want to show that it's always because of lack of self-denial, or taking up his cross, that someone doesn't completely follow Christ and is not fully His disciple. Let me show you what I mean with a few examples:

We can see that it's always because a man will not deny himself or take up his cross that he doesn't completely follow his Lord. It's for this reason that he's not fully a disciple of Christ. This is the real reason why so many people who were once burning and shining lights have now lost both their light and heat. They didn't value self-denial according to its high importance, or take any pains in practicing it.

Lastly, see that you apply this, every one of you, to your own soul. Meditate on it when you're in secret. Consider it in your heart! Take care not only to understand it thoroughly, but to remember it to your life's end! Cry to the Strong for strength, that as soon as you understand, you will practice it! Don't put it off, but practice it on every one of the thousand occasions which occur in all circumstances of life! Practice it daily, without intermission, from the hour you first set your hand to the plow, and enduring to the end, until your spirit returns to God!